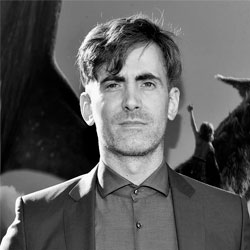 Daniel Frederick Hart is an American musician and composer. He is a classically trained violinist. Hart has released music as a solo artist and with his bands The Physics of Meaning and Dark Rooms. Hart has also toured with and recorded for numerous bands, including St. Vincent, Other Lives, John Vanderslice, Swans, The Rosebuds, Annuals, Glasser, Broken Social Scene, Pattern Is Movement, Mount Moriah, The Polyphonic Spree and Sarah Jaffe. In 2012, Hart wrote and recorded the score for David Lowery’s film Ain’t Them Bodies Saints, which premiered at Sundance Film Festival in 2013. In 2016, Hart composed the score for Pete’s Dragon, and in 2017 Hart composed the score for A Ghost Story. Hart currently resides in Los Angeles.