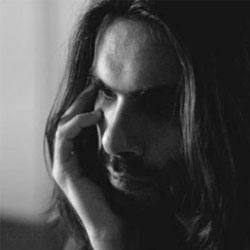 Khaled Mouzanar (born on September 27, 1974) is a Lebanese music composer, songwriter and producer. He has composed music scores for several films, including After Shave, Caramel, and Where Do We Go Now?. In 2008, he recorded Les Champs Arides, his first solo album as a singer and songwriter. His work is rooted in various music genres, including classical, jazz, Mediterranean, and oriental melodies. His compositions are also influenced by Brazilian choro and Argentinian tango.