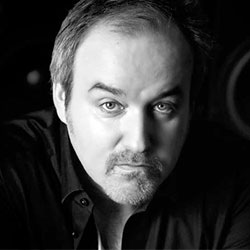 David G. Arnold (born 23 January 1962) is a British film composer best known for scoring five James Bond films, Stargate (1994), Independence Day (1996), Godzilla (1998) and the television series Little Britain and Sherlock. For Independence Day he received a Grammy Award for Best Instrumental Composition Written for a Motion Picture or for Television and for Sherlock he, and co-composer Michael Price, won a Creative Arts Emmy for the score of “His Last Vow”, the final episode in the third series. Arnold is a fellow of the British Academy of Songwriters, Composers and Authors. On the 19th and 20th May 2017 Arnold hosted two concerts of his music in Dublin at the Bord Gáis Energy Theatre.